The lovable Choisya plant of the rutaceae family has it’s origins traced to Mexico and also considered native to South-western regions of the United States.

The orangy aroma that the fruit releases played a huge part in the conceptualization of it’s pet name – Mock Orange.

It was documented to have been brought to Europe in the 1800s and have flourished in the United Kingdom.

Today, there are 5 main varieties of Choisya. And each genre retains it’s unmistakable scent and distinctive white flowers.

This is the most authentic and original plant before designer versions of them started to gain publicity. 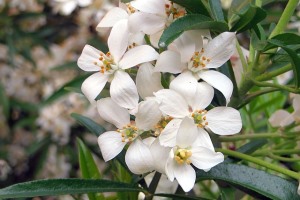 Maybe due to it being the original, without artificial experimenting, it tends to grow it’s trademark star-shaped flowers more quickly and easily compared to other varieties.

It blossoms from April to May. With a very high probability of a second wind in the months of autumn.

With paddle-like green leaves and flowers with the whitest petals you will ever see, it’s no wonder that the striking plant is a foliage that you cannot miss when walking past it.

It flourishes well in areas with sun and shade.

They are known to grow up to 2.5m tall and approximately 2.5m wide.

The sundance, also known as Lich, is one of the earliest variety of the original Choisya ternata.

It got it’s catchy nick name from it’s lime green foliage that looks breathtaking gorgeous in the sun. Some observers swear that the ternate leaves are bright yellow in color.

This is a very sturdy genre that gardeners love to use as hedges due to it’s ability to withstand onslaught from the weather. Sometimes even as shrubs.

Also flowering from April to May with a second flush in autumn, it’s flowers tend not to be in the masses as the original Choisya.

The size it can grow to is about the same as the original Choisya.

The proper name of this plant is Choisya x dewitteana aztec pearl. So you must be able to see why we just affectionately call it aztec pearl for short.

This small evergreen shrub is known for it’s more pointy leaves that tend to be a darker green compared to the original.

With flowers up to 3cm in width, it flowers in late spring and autumn.

The most unique part of this range is it’s flowers tend to bloom in tight clusters all over the plant.

The buds are in an odd color that you can only describe as tinge-pink, hence the name aztec pearl.

It’s potential size is the same as the original plant.

As with the aztec pearl, the scientific name of this variety is Choisya x demitteana white dazzler.

Also labelled Londaz with reference to London, it can be easily identified with it’s very pointy slim leaves, and flowers that can basically spruce up all over the plant in huge clusters.

The flowers have a golden stamens at the center, with petals in the purest of whites.

No problems guessing where it got it’s white dazzler name from.

Unlike it’s siblings, this genre grows to a lower height and is the hardiest of the lot.

You can basically just plant the seeds and it will come to life by itself without much maintenance.

As little to no pruning is required, it would be an ideal choice for lazy gardeners.

It got it’s mysterious sounding name from it’s slender elliptic leaves that are bright yellow in color.

While it also flowers in late spring like the others, it’s second flush occurs in summer.

With the aztec pearl as the parent plant, Choisya aztec gold was bred by Alan Postill.

It retain most of the features of aztec pearl but now with green gold at the heart of the plant and rich gold at the ends of shoots.

The trademark orange-like aroma of Choisya now includes a scent of almond for good measure. Making it even more of a magnet to attract bees, butterflies, and other insects.

You can expect it to potentially grow to about 1.2m high and 1.2m across.

With this plant being such a favorite about homeowners and gardening hobbyists, breeders have tried their hand at creating their own designer hybrid versions.

A lot of credit have to go to Peter Moore for his tireless work on developing different types of Choisya.

His latest creation is the Apple Blossom.

It has pinkish petals that split to reveal pink flower buds.

While the foliage is narrower than the original, the flowers has an innocently seductive aura of white and pink.

It grows at a slower pace than other varieties of Choisya and up to 1.4m tall with 1.4m across.

There has also been records of a particular species named Choisya Arizonica whetstone.

I have not seen it myself. So I cannot be certain that it is a totally different range of plants.

But from photos and images I could find of it, it resembles the Aztec Pearl.

I will just include the Arizonica in this list.

Choose your favorite variety most suitable for the garden. You’d probably not go wrong with any choice anyway.